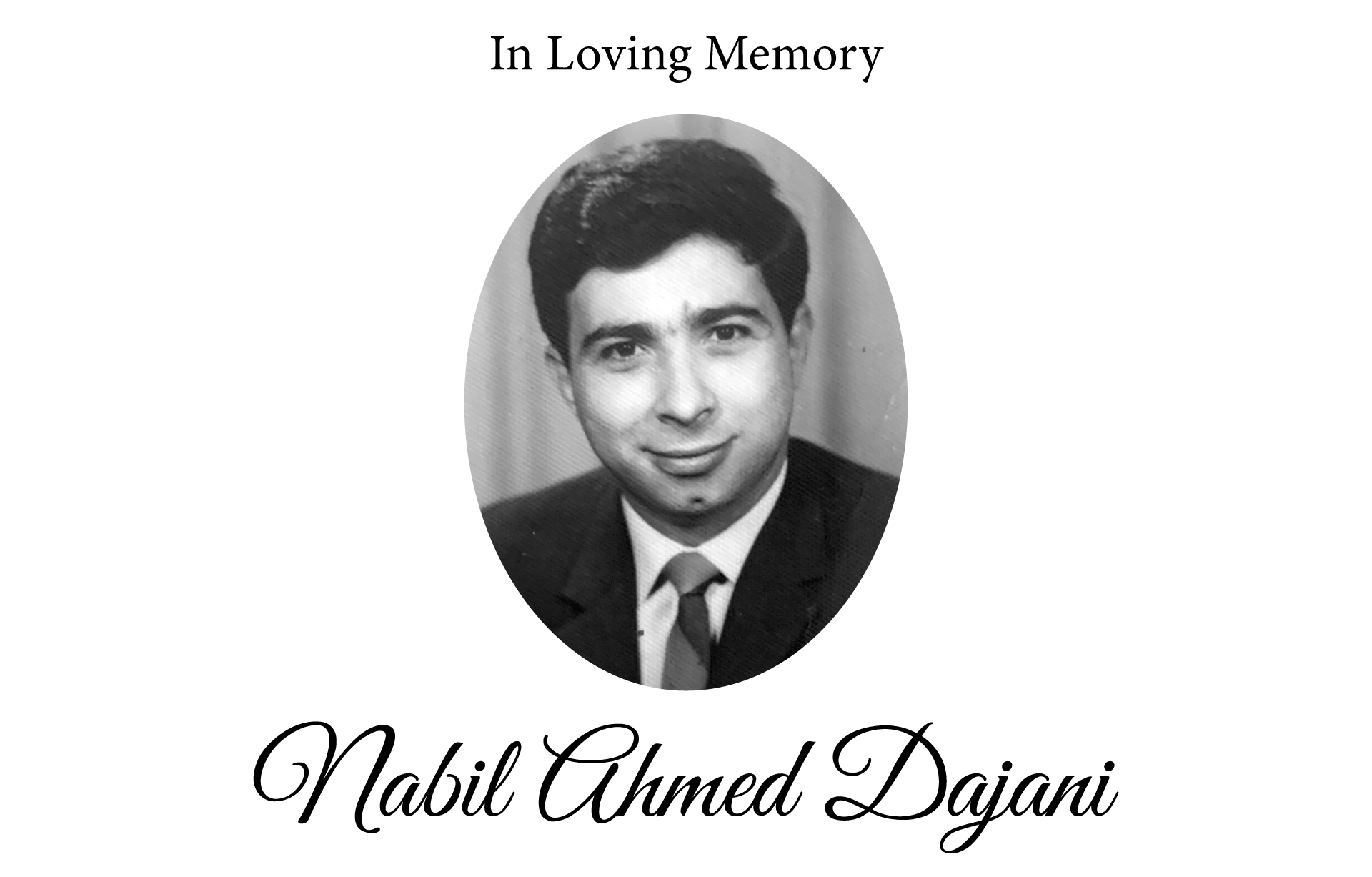 Nabil Dajani, son of Balkis Alami and Ahmad Daoud Dajani, passed away on June 15, 2020. He was 82 years old. His loss is mourned by his family and friends far and wide from Orange County (Los Angeles) to Jerusalem, the city of his birth. He leaves behind many nieces, nephews and cousins as well as his beloved, Ana Ligato. Nabil is preceded in death by his siblings, Taher, Adel, Nawal and Suhail Ahmad Dajani.

Nabil Dajani was born, the 4th of 5 children, in the British Mandate of Palestine in 1937 and attended the Ramallah Friends School in the West Bank. In 1946, Nabil witnessed the carnage left by a Zionist led terrorist attack on the King David Hotel, a short walk from his family home in the German Quarters. Following later similar attacks, and fearing for their children’s lives, the Dajani family fled during the 1948 exodus with over 800,000 Palestinians, becoming the first generation of Palestinian refugees. The family settled in the Heliopolis area of Cairo, Egypt where his parents remained for most of their lives.

Though the family struggled at first, his father was able to open a grocery store where Nabil proved as industrious, as he was curious. His frequent expulsions from high school for being a smart alec, contributed to his overtime at the store. It was there that Nabil acquired a knack for accounting but his curiosity made him good at it. His father taught him the importance of punctuality, never to rely on credit, and never pay a bill he didn't understand. To further nurture his curiosity about the world beyond Egypt, and lacking a passport due to his refugee status, Nabil frequented the movie theater using tips he’d earned as a delivery boy. Nabil became exposed to the history and nature of revolutionary movements through such movies as Viva Zapata and the Spanish fictional hero, Zorro, who defended the rights of indigenous people, which also helped shape his political views. He became an ardent fan of Gamal Abdel Nasser, the leader of the coup d’etat that overthrew the Egyptian monarchy, and his admiration for the great leader stayed with him until his death. Abdel Nasser introduced equalizing reforms for Palestinians in Egypt during his presidency and his staunch support for the Palestinians’ rights to return to their homeland further elevated him in the eyes of many.

Nabil graduated in 1960 from the American University of Cairo and moved to Libya for a brief period of time to assuage the labor issues for Palestinians in Egypt. He came to California in the late 1960s, graduating with two Master Degrees: Business Administration, and Business Administration in Accounting, at Golden Gate College 1969-1971. He kept working well into his seventies, making a full circle by working as a CPA for a local grocery chain before he retired. Though Nabil made the United States his adopted home, he was always a Palestinian at heart. He was known to jokingly say that he even spoke English, volume, hands and all, like a Palestinian. He was characteristically unapologetic, proud and unwavering when asked about his origin. From the moment he came to Orange County, he became politically active in the pursuit of human rights for Palestinians. Later in life, he attended the Cousins Club of Orange County which brought together Jews and Palestinians to share their traumas. When asked what he missed most about Palestine, he once said that he missed his brethren, and hearing his native Palestinian dialect spoken around him.

Nabil was always ready to listen, always enjoyed a good discussion, and never jumped to a premature conclusion before gathering his facts. And this made him an effective communicator and educator on Palestine. He also, of course, enjoyed sparring on the court in a doubles tennis match.

His family and friends will remember him as someone who would not falter to come to their aid, one time taking a homeless person from Lebanon into his home. He was a devoted son, brother and uncle, always thinking about his family scattered across the globe. But most of all, Nabil believed in being humble and grateful for the life he had been blessed with. May he rest in peace.

In the words of his favorite poet and philosopher, Omar Al Khayyam:

“If the Wine you drink, the lip you press,
End in the Nothing all Things end in-Yes-
Then fancy while Thou art, Thou art but what
Thou shalt be- Nothing-Thou shalt not be less.”

Donate to LEO in Nabil's Name