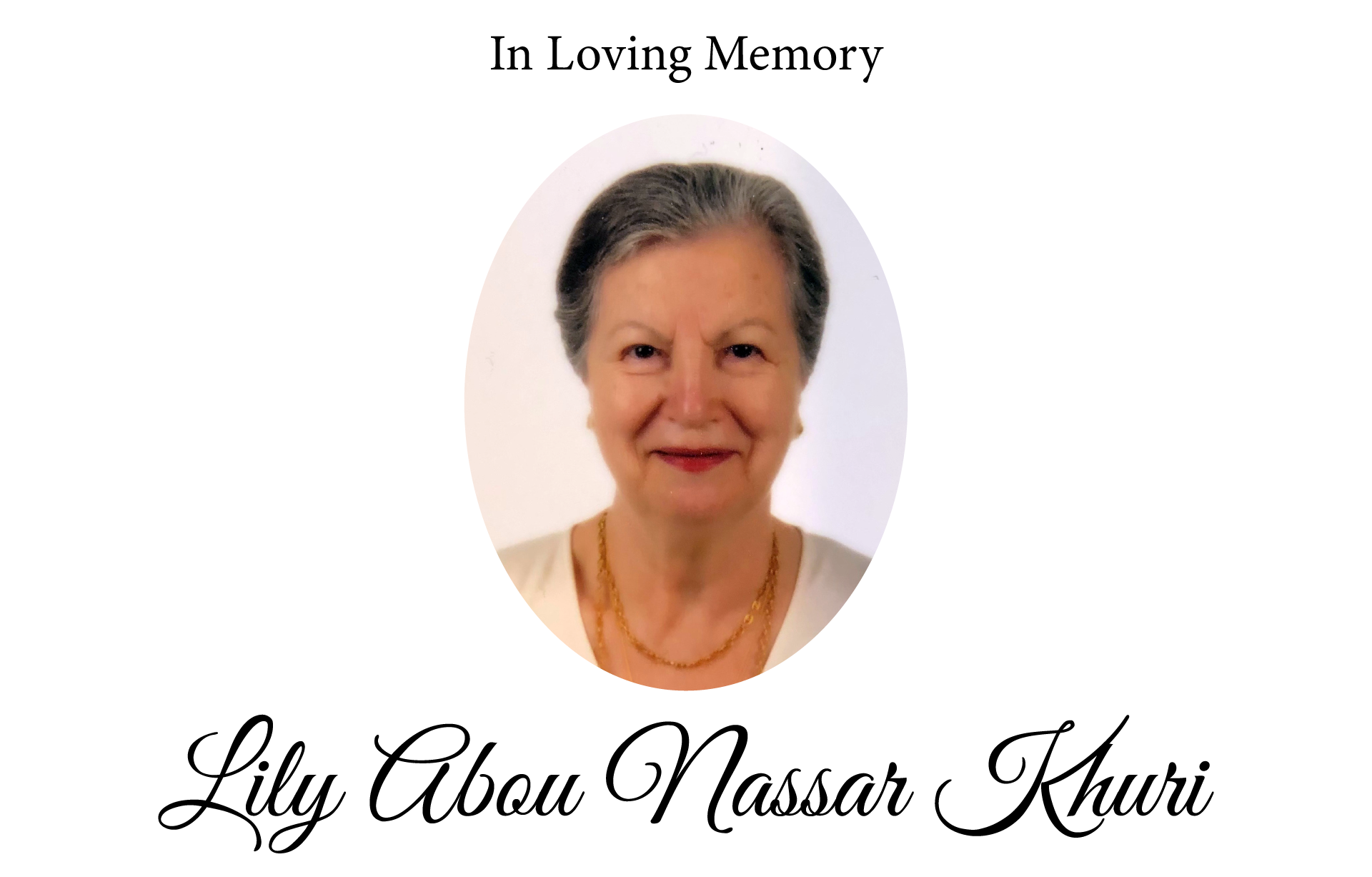 Early Childhood: Lily Saleem Abou Nassar was born to Deya Akkawi and Saleem AbouNassar, in Haifa, Palestine. Both families were from Nazareth.

Lily was the youngest of five children, Faheema, Olga, Antoine and Georges.

Saleem Abou Nassar owned the first Opel Car Dealership in Palestine, where he worked alongside his five brothers during the British Mandate.

In 1947 Tony was a medical student in Geneva and Georges was in business school at the American University of Beirut (AUB). Faheema and Olga were also in Lebanon at that time and had graduated from the American School in Saida, Lebanon.

In 1948 during the Nakba (known as the catastrophe), Lily was aged 12, she and her parents fled to Lebanon to join her siblings. ​They lost all their worldly belongings and moved into the poor Beirut neighborhood known as Basta.

Saleem went to Jordan to start a new car dealership and was unsuccessful returning to Beirut. He established an atelier along with his wife Deya, daughter Faheema and son Georges , and then the family became part owners of the Sporting Club Beach resort before taking full ownership till the present day.

Lily attended Beirut College for Women (BCU), now known as the Lebanese American University, and spent a semester abroad at Chatham College in PA. She received her BA in social work from BCU in 1957.

Adult Life: Lily married Dr. Graham Leonard, an American from Tennessee in 1957, and they had two daughters, Deya’ and Mona. Both girls were born in Cambridge, MA where Graham was working on his Ph.D. at Harvard at the time. During their marriage they lived in the Mensoufia District of Egypt due to Dr. Leonard’s work at The Fundamental Education Centre for The Arab World. Dr. Graham Leonard later became the Dean of Students at the American University of Beirut (AUB). The family resided in Beit Mery and Beirut, Lebanon till they divorced in 1965.

Lily later married Dr. Fuad Khuri, a Lebanese citizen from Alley. They had three children, Paul, Valerie, and Heather and moved the family to London during the Lebanese civil war in the mid 1970’s. They later moved to Houston, Texas, where they raised their children and resided for the rest of their lives. She had 6 grandchildren and one great grandson.

Philanthropic work: From as early as her college years Lily was actively engaged in philanthropic work. Her first real passion was the Hidanet Al-Tufl orphanage in Zahle, Lebanon introduced to her by her college friend and famed author Emily Nasrallah. Lily raised funds for the orphanage for many years and was the US Fundraising contact. Focused on the wellbeing of children and youth Lily became an active fundraiser for Saint Jude Children’s Hospital’s Houston chapter. She was an active member of her church and often cooked meals to serve the homeless.

When asked by Saint Jude children’s hospital and the Rene Moawad Foundation if they could honor her, she turned down the honor. To explain that decision, she told her children: “the work I do is between me and my relationship with God, I don’t need an award.”

When her eldest child, Deya’ established the Leonard Education Organization (LE.O) Lily engaged from day one, reaching out to all of her friends to gain support of the program, and was instrumental in securing funding and support to launch the organization. She hosted LE.O students in her home, cooking Palestinian food for them and learning about their lives and that of their families. In her final years when she was ailing, she would ask questions inquiring about the program and smile in pride when she heard about the students’ achievements.

Well-known as a hostess and excellent cook, Lily will be remembered by her family and friends for her generosity and loyalty to those she loved. Her dearest friend Mrs. Lois Lewis will tell you that “she didn’t know a stranger and the world was better for her presence.” 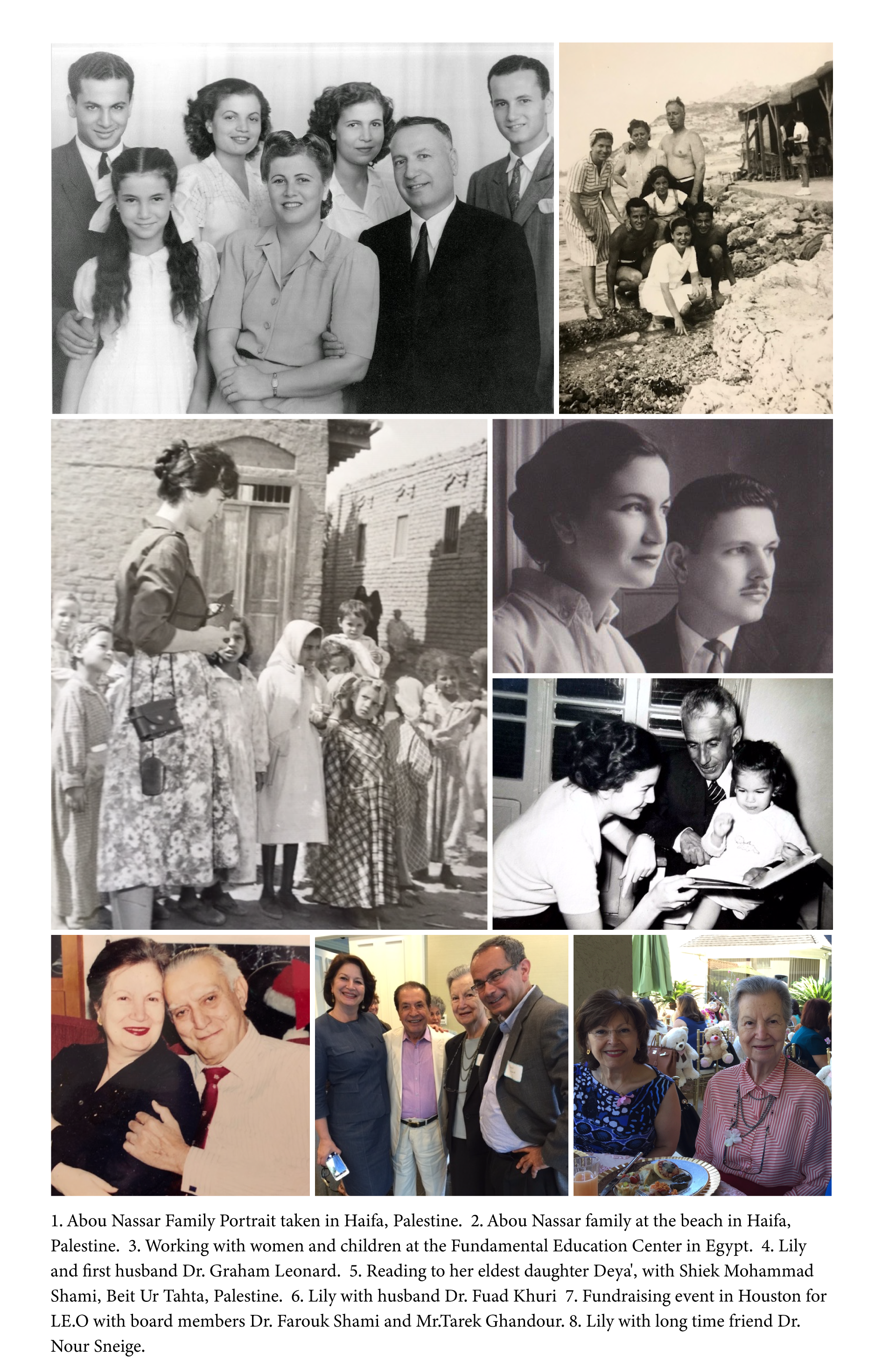 Donate to LEO in Lily's Name